I’m seeing it day after day. At almost every dealership. It’s what can only be described as a problematic, two-pronged pricing problem.

I’ll dig into the problem in a moment.

But first, I must share that the seemingly almost-universal nature of the pricing problem affirms an understanding about car dealers I’ve carried for years. The understanding’s based on observations of my own behavior as a dealer, and what I see with other dealers.

That’s effectively the backdrop for the two-pronged pricing problem in the present market transition.

On the right, I have shared an example of the Pricing 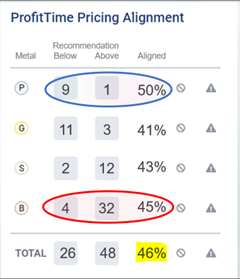 Alignment box from ProfitTime GPS. The box shows how much a dealer’s current retail prices align with the price range recommendations ProfitTime GPS offers. (Note: ProfitTime GPS recommendations use data science to help dealers optimize each vehicle’s ROI according to each unit’s unique investment value. Practically speaking, the system recommends urgency for a dealer’s most-troubled vehicles (the Bronze cars), and patience with the highest-value vehicles (the Platinum cars).

The Pricing Alignment box here mirrors the data I see almost every day at almost every dealership. Note the dealer’s overall alignment (highlighted)—46 percent. I read this percentage as a sign that there isn’t much collective faith in ProfitTime GPS’ recommendations. More than half the time, someone in the dealership believes they know best how to price their vehicles.

Now, let’s examine the most prominent prongs of the pricing problem.

Bronze Vehicles: You can see the dealer’s Bronze vehicles (red oval) represent almost half of the dealer’s total used vehicle inventory. Generally speaking, the share of Bronze vehicles has been on the rise for dealers because asking prices are too high, the vehicles aren’t selling and depreciation is eating away at whatever profit potential they may still hold—a topic I addressed in a previous post.

In this case, the vast majority of the dealer’s Bronze vehicles (32 vehicles) are priced above ProfitTime GPS recommendations. (The same is also true for the dealer’s Silver cars, which hold a slightly higher ROI potential than Bronze units.)

When I ask dealers about the pricing of their Bronze vehicles, and the apparent practice of pricing their worst investments most proudly, many don’t have an answer. Some may say they’re simply trying to get gross on cars that cost a lot to acquire. My take: Irrespective of how or why the vehicles became Bronze cars, we can all agree the current pricing alignment represents a problem—one that’s not likely to get better over time.

Platinum Vehicles: Like many if not most dealers, Platinum cars (blue oval) at this dealership represent a smaller share of the overall used inventory, about 14 percent. You can see the dealer’s priced all but one of their Platinum vehicles below the ProfitTime GPS recommendations.

Generally speaking, when I ask dealers why they price Platinum vehicles below system recommendations, the responses reflect a belief that, if they ask all the money for these vehicles as ProfitTime GPS recommends, they won’t get any Vehicle Details Page (VDP) views, or third-party sites might deem/designate the asking price as “too high” for shoppers.

The GM’s concern is understandable, but it also doesn’t hold water.

Across the country, I’m seeing dealers price Platinum vehicles up to the price points ProfitTime GPS recommends. Guess what? The cars don’t get as many VDPs as other units, and they still sell fast. How can this be? Well, the Platinum vehicles are blessed with low Market Days Supply, high retail volume and dealers own them really right. Sales associates are incentivized to sell them, because they recognize a good gross profit opportunities. Overall, Platinum cars require fewer online looks, because they’re in-demand cars that buyers will search to find and purchase when they do.

Now, let’s all step back from the dealer’s Pricing Alignment particulars, and ask ourselves, “What’s really going on here?”

It seems to me the answer rests with beliefs and behaviors dealers and used vehicle managers bring to their jobs every day. They know they have a large share of now-aged and -distressed inventory (the Bronze units) that isn’t selling. They also don’t want to face the music on these vehicles, which is why they’re consistently priced too high.

Meanwhile, because the dealer’s like everyone else and wants to sell as many vehicles as possible in any given month, they are cheap-selling their best inventory (the Platinum units) to turn these cars faster and make up volume lost due to the slow-selling Bronze vehicles.

My guidance to dealers is you don’t have to operate this way when you have the right technology and tools to distinguish the earners, turners and everything else in your inventory. You can now more consistently and easily make the most investment-optimal decisions with every car. Best of all, you’ll be more sure-footed with the cars you have in stock, and their prices, the next time the market turns.