If you’re a franchised dealer looking to stock more one- to three-year-old vehicles in your used vehicle inventory, you’re probably having a hard time lately.

The difficulty owes to a few related factors. First, there are fewer one-to-three-year-old vehicles available. In two of the three most recent years, 2020 and 2021, 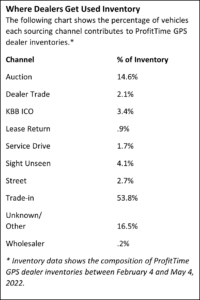 Given this backdrop, I’ve asking a question: Where’s the opportunity?

Generally speaking, the ProfitTime GPS dealers are like everyone else. They’re getting most of their one-to-three-year-old vehicles from the sourcing channels they’ve relied on for years. The data shows that 46 percent of vehicles less than five years old in dealer inventories come from trade-ins, and 19 percent come from auctions.

As you might expect, the profit potential these vehicles are able to produce is dramatically different. With trade-ins that are less than five years old, 36 percent arrive in dealer inventories as “Gold” vehicles and 18 percent are “Platinum.” (ProfitTime GPS ranks the investment value of each vehicle on a scale of 1-12, classifying them progressively as Bronze, Silver, Gold or Platinum vehicles.) Meanwhile, auction vehicles that are less than five years old consistently enter dealer inventories as Bronze (63 percent) and Silver (20 percent) vehicles, which represent the lowest investment values on ProfitTime GPS’ scale.

This data leads to another question—what other sourcing channels might offer dealers the opportunity to bring in more late model vehicles with better overall investment value potential?

To answer the question, I looked at inventory data to determine other sourcing channels where current volume and investment values suggest an opportunity. Some might readily point to lease returns as a solid option for dealers to get near-new inventory. The supposition is true—dealers take in almost 70 percent of lease returns as Gold and Platinum vehicles. However, lease return volume amounts to less than 1 percent of dealers’ total inventories, and current conditions see many lease owners choosing to keep their vehicles.

Meanwhile, there’s another sourcing channel that stands out as offering what might be regarded as untapped potential for late model inventory—the service drive. ProfitTime GPS dealers currently source about 2 percent of their used vehicle inventory from the service drive. When they bring in these vehicles, the profit potential on late model units runs strikingly close to trade-ins—35 percent are Gold and 20 percent are Platinum. This data affirms a comment I’ve heard from more than one ProfitTime GPS dealer: “There’s gold in your service drive if you go after it.”

As I’ve talked to dealers, most acknowledge that there’s ample room for improvement in the way they source from their service drives. Many have made this sourcing channel a higher priority this year. I’ve been collecting best practices for service drive sourcing, which I’ll share in a future post.

In the meantime, my quick study of dealer inventory data offers a key take-away for every dealer: Once you know the investment value and type of vehicles you might expect from individual sourcing channels, the better able you’ll be to profitably acquire the cars you really need to sell and satisfy today’s near-new-minded buyers.

The post A Closer Look at Where Dealers Can Acquire Late Model Vehicles More Profitably appeared first on Dale Pollak.